The connectivity landscape is complex and crowded, with huge variation between indoor and outdoor locations. As a real-world walk-through shows, end users need help to navigate their way through it.

How do you paint the Connectivity Landscape? For decades mobile operators have relied on coverage maps, which necessarily simplify a complex reality into an easily digestible picture, presented as evidence of available connectivity. Their usage has been sustained by the rollout of every new generation of network technology, with islands of 3G superimposed on saturated 2G maps, and the process repeated with the introduction of LTE.

Unfortunately, from day one, these maps aggravated those end users whose experience of connectivity contradicted the pictures they’d been given. Intended to market network strengths, coverage maps simultaneously exposed network weaknesses.

The biggest problem with these maps, of course, is that they ignore an entire dimension of the user’s real world. The connectivity landscape they depict is flat and featureless. In life, that landscape is crammed with buildings that create havoc for smartphone users, and the mobile operators trying to keep them connected. These maps hide literally millions of uncomfortable truths beneath their blanket cellular coverage.

Provision of indoor coverage is the most daunting connectivity challenge facing mobile operators today. Every building footprint represents an area on the coverage map that is fortified against cellular penetration. Worse, the total indoor coverage requirement for any city is every one of those areas replicated for each floor of the building it represents. A five-storey building requires coverage that is five times’ its ground level footprint

This is a total coverage area that, for any city, is substantially larger than the city itself! Look at Metropolitan New York—it contains more than a million buildings.

Current generation mobile networks provide excellent bandwidth and, at least in urban areas, good outdoor coverage. But they are all constrained when it comes to replicating that quality of coverage indoors, particularly inside large commercial buildings such as shopping malls, large retail stores, and hospitals. As users move indoors, they often find themselves transported from the wonders of LTE back to the bad old days of 2G and early 3G.

But what does this experience actually look like to an end user going about their day?

In a recent experiment I walked a loop around the inside of a large, newly built retail outlet here in the U.S. while monitoring the LTE signal quality. Immediately upon entering, the LTE signal began to rapidly degrade. By the time I reached the middle of the building, the phone dropped LTE completely, reverting to a weak 3G connection that delivered barely any data throughput at all.

Worse, the handset didn’t attempt to switch back to LTE until I was outside the store again, leaving me with low speed data for the remainder of the visit. For an industry striving to increase dependence on wireless data connectivity, this represents a poor effort. I was effectively disconnected, and my mobile operator was doing nothing to help me.

The retailer in question provides in-store Wi-Fi, free to customers once they have been forced to navigate a click-through portal to gain access. Monitoring the Wi-Fi signal strength of the connection during the same walk through the store showed that there was good coverage throughout. What’s more, the Wi-Fi network provided an average throughput of 5 Mbps for the duration of my visit—comparable to the LTE performance I measured in the area just outside the store. 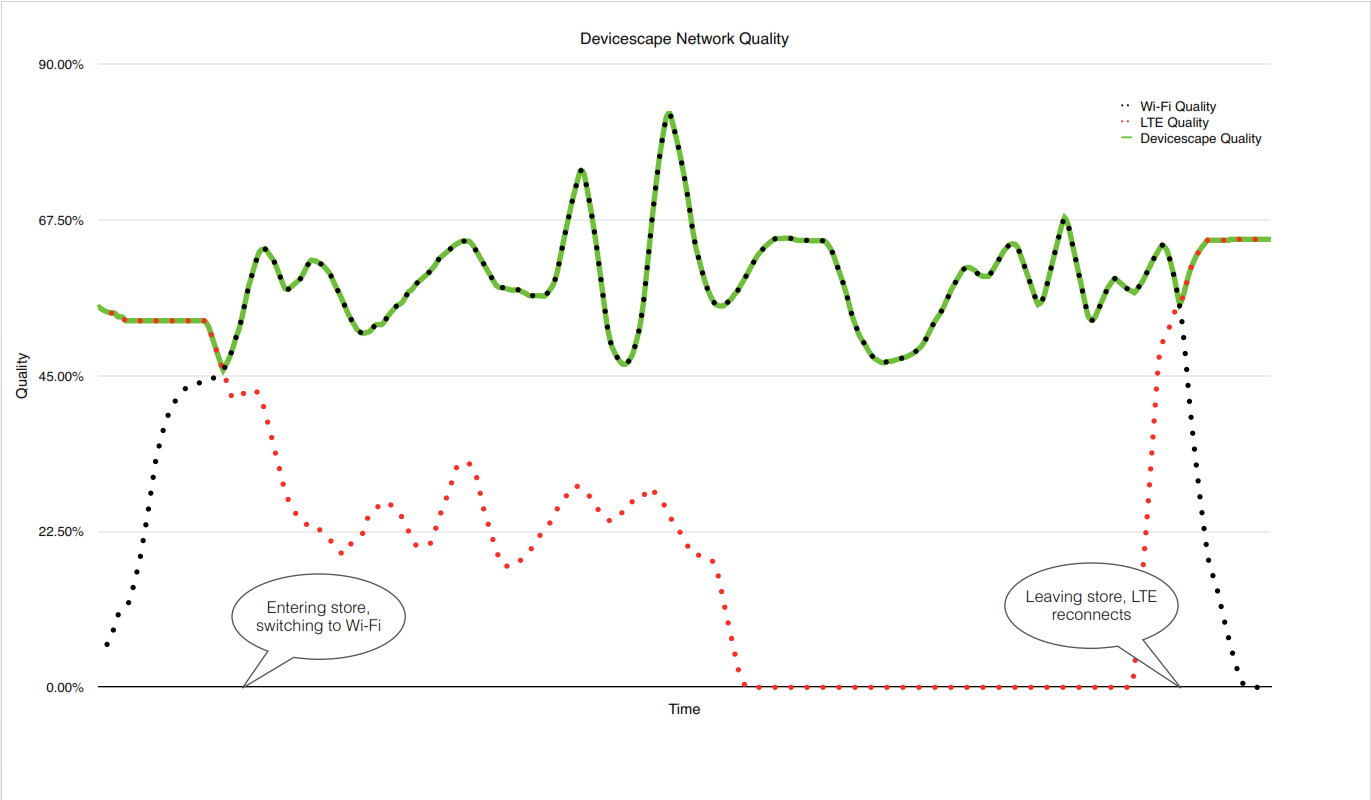 Of course, the Wi-Fi signal strength dropped oﬀ quickly as I left. But I didn’t need it outside the building; I had a first-rate connection. Outside and on the move cellular does the unbeatable job it was designed to do. Indoors, Wi-Fi is simply more effective and more abundant more of the time. This is the reality that end users face every day.

The connectivity landscape is becoming just as tightly packed with Wi-Fi as the actual landscape is with buildings. Wi-Fi is increasingly prevalent in homes and offices, but these deployments represent just a fraction of the total coverage reach it provides. The most significant growth has been that of amenity Wi-Fi, offered by businesses as a free service to their customers. It has altered the connectivity landscape in a truly fundamental way.

Because it is deployed to attract and retain smartphone users, amenity Wi-Fi fills out the connectivity landscape in precisely the places where users spend their time. Here in the U.S., free amenity Wi-Fi is available in 99% of airports, 95% of hotels, 71% of stadiums and convention centres, 72% of museums, 68% of cafes and bars, and 69% of fast food outlets. It’s a huge resource.

So when T-Mobile USA CEO John Legere announced his Wi-Fi Un-leashed program last September, and likened it to adding “millions of towers” to his network, he wasn’t wrong.

In the store where I measured LTE and Wi-Fi performance, a consistent quality of connection was available both indoors and out. The only problem was that I had to manage the process of transition myself.

At Devicescape we believe that successful mobile operators will be those that start thinking about Connectivity First; those that connect the user wherever they are in the landscape, using the best technology available in the moment. By doing so they will not only be in a position to give their customers a more realistic map of the connectivity landscape, they will actually be helping them to navigate their way through it.