SAN BRUNO, Calif., June 11, 2014—Devicescape today announced that a survey of more than 400 small, consumer-facing businesses across the U.S. has found that the provision of amenity (complimentary) Wi-Fi for customers is driving improvements across key metrics, including foot traffic, time on premises and customer spend. The survey results led iGR, which conducted the research, to conclude that Wi-Fi is on track to become as fundamental to these businesses as their core utilities.

Almost two-thirds (62 percent) of respondents said that customers spent more time on their premises since Wi-Fi was introduced. 50 percent said that this resulted in customers spending more money with just 0.1 percent reporting any reduction in customer spend. 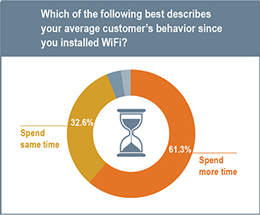 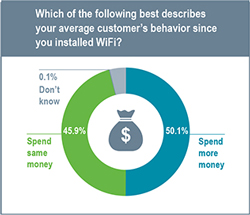 The survey, carried out by iGR on behalf of Devicescape, the company that has created a massive network of high-quality hotspots from machine learning and crowdsourcing technologies, polled a range of business types such as bars, coffee shops and restaurants, book shops, clothing boutiques and salons. 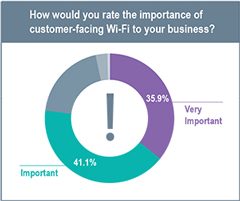 More than three-quarters of respondents (77 percent) rated customer-facing Wi-Fi as “important” or “very important” to their business. Many described it as a competitive requirement.

While different businesses had different goals for deploying Wi-Fi in the first instance, the survey revealed they had high success rates in common. The introduction of Wi-Fi was judged a success by: 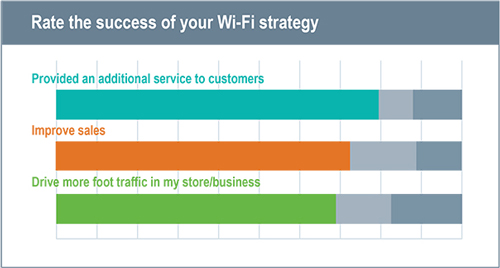 The survey also showed that consumers are increasingly aware of connection quality and speed over complimentary Wi-Fi. When asked about the performance of their Wi-Fi networks, 66 percent of respondents said their customers rated the speed as “fast” or “very fast.” Almost three-quarters of those surveyed (73 percent) said they “never” or “rarely” received customer complaints about the speed or quality of their Wi-Fi connection. 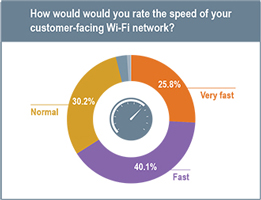 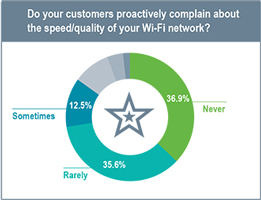 Iain Gillott, founder and president of iGR, said, “The survey results show how important the provisioning of customer-facing Wi-Fi has become for retail businesses. The availability of Wi-Fi is no longer an innovation limited to the large retail chains—small businesses are now offering the same services in their establishments, for both employees and customers. In the near future, small businesses will consider Wi-Fi as fundamental to their success as electricity or running water.”

“There’s a stunning misperception that amenity Wi-Fi is of poor quality,” said Devicescape CEO Dave Fraser. “This study shows what we’ve known for a long time—amenity Wi-Fi is becoming the norm for small businesses and the service provided is typically fast and high-quality. It is a powerful platform for mobile connectivity and offers up tremendous benefit for both enterprises and consumers.”

The U.S. Retail Wi-Fi Survey was conducted by iGR and published in June 2014. The Web-based survey, commissioned by Devicescape, was fielded among U.S.-based small businesses in multiple retail industries between February 10, 2014 and February 18, 2014. The total sample size was 400 decision-makers at small businesses (independent / “mom and pop” retail stores only) in numerous segments including: bars, nightclubs, restaurants, fast food establisment, coffee shops, clothing boutiques, books shops and salons. Note that the survey data in this press release and in iGR’s report was weighted against firm-level data obtained from the Statistics of U.S. Businesses.