The Calm After the Storm: Connectivity First at MWC15

The dust from Mobile World Congress 2015 may have settled but the debates that gave the show its energy will echo through the industry for some time to come.

Two things really stood out about those debates. First, the competitive tension caused by the likes of Google and Facebook (with its internet.org connectivity program) playing in what was once the exclusive preserve of the mobile operator is only going to intensify. For all Mark Zuckerberg’s conciliatory comments to his keynote audience, this is a delicate situation.

Second, Wi-Fi was prominent in many of the leading debates. Whether it was the prospect of Google’s MVNO launch, Wi-Fi calling, the gathering momentum of the Wi-Fi First movement, or the evolution of 5G, the means by which operators can integrate Wi-Fi into a wider connectivity service has clearly become a leading industry concern.

For Devicescape this is great news. It’s a subject on which we have strong opinions—and the timing of this renewed enthusiasm for Wi-Fi at an industry level meant that we were able to contribute a good deal to the discussion.

So I’d like to take the opportunity, during this brief moment of post-MWC calm, to share some of those contributions with customers and colleagues who may not have been at the event—or who were too busy to keep up with all the news.

In the weeks running up to the show the impending Google announcement was featured extensively in the business press, with the Wall Street Journal leading the coverage. We were thrilled to be included in that coverage, which you can see (with a subscription) on the WSJ site.

“Google’s entry into the wireless market would bring unwelcome uncertainty to carriers already dealing with an intensifying price war.”

“It’s a very aggressive move,” said Dave Fraser, CEO of Devicescape, a company that is stitching together a network of millions of Wi-Fi hot spots world-wide. “You can imagine Google driving down the price to be disruptive and paying for it with revenue from other services that the company already provides, like search and advertising.”

We got a further mention when WSJ journalist Ryan Knutson chronicled the month he spent using Wi-Fi as his sole means of wireless connectivity.

“Devicescape have stitched millions of hotspots together globally into a network with a single sign-on.”

Just how easy Knutson found life without cellular might not make the most comfortable reading for mobile operators, but his experience underlines a very important fact: Connectivity is bigger than any one bearer technology.

The climate of urgency around Wi-Fi meant that our pre-MWC news announcements were well received by the press. Chief among these was the launch of our Coverage Continuity solution, which enables operators to use CVN and private Wi-Fi to maintain connection quality in challenging cellular conditions, particularly indoors. With our Offload and ABC products well established, Coverage Continuity completes a portfolio that lets operators tailor their use of Wi-Fi to their specific business needs.

As well as the attention this drew from the telecoms press, the announcement was covered by Yahoo Finance and GigaOm (sadly having some tough times just now).

“Coverage Continuity will work anywhere Wi-Fi and cellular are both present, but it’s an ideal indoor solution. The mobile network often has trouble punching through multiple walls, while Wi-Fi is readily available indoors. Once a strong cellular signal is detected, Devicescape then moves the device back onto the 3G or 4G network.”

At the show itself we continued to push our Connectivity First message, expanding the themes of the manifesto through a number of features in the MWC15 Show Daily. Addressing the needs of the smartphone user, the changing connectivity landscape, the increasingly competitive operator landscape and the need to rethink entrenched service concepts, each of these features is now live at www.devicescape.com/blog/ if you are interested in even more reading!

A show the size of MWC reflects an industry that is constantly expanding and diversifying. But for all the verticals and adjacent sectors on display, the provision of wireless connectivity is still the most important thing for the core operator audience. The integration of all forms of Wi-Fi into the service is now a competitive necessity for that operator audience, reflecting as it does the needs of an end user community whose choice of service providers is broadening all the time.

This need was nicely depicted in a wrap-up piece by Stephen Lawson at IDG, which you can read here http://www.pcworld.com/article/2892932/can-a-barcelona-romance-bring-wifi-and-cells-together.html.

“Devicescape, which uses an app to give carriers’ subscribers access to free public hotspots, is introducing a service to make that automatic. The Coverage Continuity feature automatically detects where the cellular signal is weak and shifts users to an available hotspot. Then it shifts the subscriber back onto the cell network when they get within range of a good signal again. Coverage Continuity is in trials at six Tier 1 European carriers, CEO David Fraser said.”

At Devicescape we believe that 2015 will be a pivotal year for the traditional operator community, as new competitors with fresh approaches to technology and service provision begin their assault on the establishment. Right now we’re fielding just as many enquiries from disruptive innovators as we are from incumbent players so we have a real sense of the shifting landscape. We believe the most successful players will be the ones who think about Connectivity First. 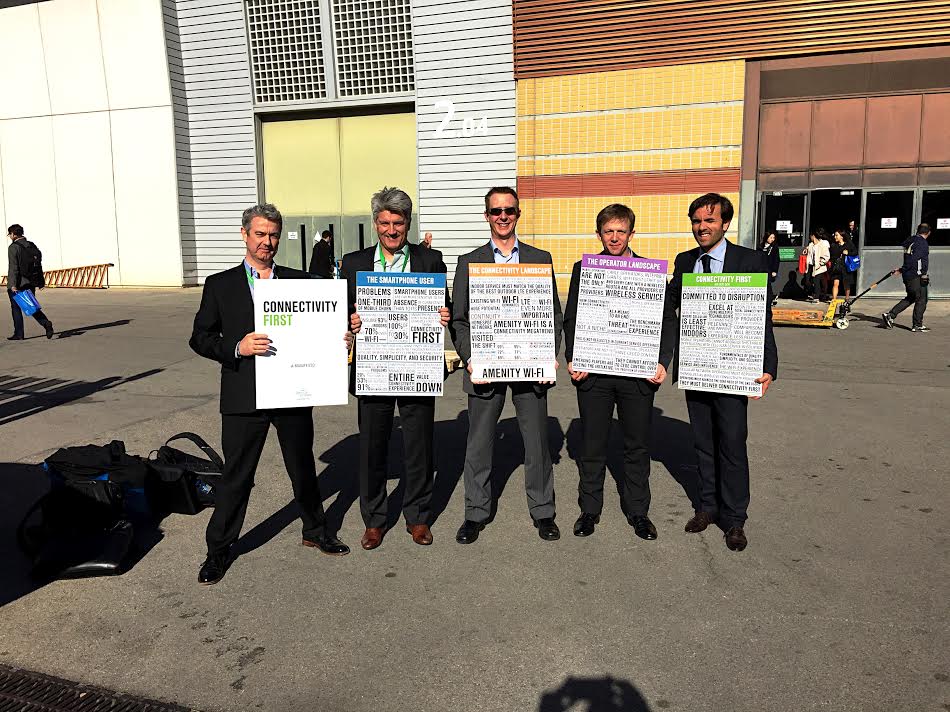